Michael Enn Sirvet is a contemporary sculptor and multidisciplinary artist who lives in Washington, DC and Baltimore. He was born in the forested suburbs of northeastern New Jersey, with a backyard that bordered a 50-acre wetland. This enchanting area was only twenty miles from all that New York City had to offer. Having a father who was a renowned mechanical engineer, a grandfather who was a master carpenter, and a grandmother who was a nature painter influenced Michaelâs creative and scientific life greatly beginning in his earliest years.

Michael attended Fordham University in New York City where he earned a degree in Finance with a minor in Art History. After receiving his degree in Finance, he promptly put that to no use whatsoever by entering the publishing industry in Manhattan. For two years after leaving Fordham, he spent his time in both the steel canyons of New York City, and amid the hills, valleys and waterfalls of northeastern New Jersey. It was during this time that he began to closely relate the machines and intricate mechanical designs of his fatherâs work, with the complex rhythms, structures and patterns he discovered in the nature and the wild - resulting an outcome of his first serious creative forays into the visual and musical arts.

An avid trail runner, his moving meditations in the hills and hollows of the New Jerseyâs Ramapo Mountain Range led him to return to college for further exploration of the arts and sciences. At the University of Maryland, Michael studied Mathematics, Engineering, Sculpture and Music, and began traveling North America to explore the most intense offerings of the natural world. Today he will proudly declare that he has camped, run, hiked and mountaineered in well over seventy of the United States National Parks and Forests, with lifelong visits totaling well into the hundreds. Michael graduated University of Maryland with a degree in structural engineering and a deepened fascination with science, the arts, nature and the patterns that bind them together. He practiced engineering with some of the leading engineering firms in the Washington, DC metropolis; in the final six years of his career he was with one of the leading firms in the world, Silman, working on such structures as Frank Lloyd Wrightâs Falling Water, the Smithsonianâs Hirshhorn Museum and Sculpture Garden and the National Museum of American History.

While working as a structural engineer, Michaelâs sculptural mindset took root and in 1999 he began creating sculptural works of art in evenings and on weekends. As his engineering career advanced, the intrigue of purely aesthetic, abstract structure eventually overtook him, and in the autumn of 2008, he left an immensely rewarding position to pursue a career as a sculptor.

Today Michaelâs artwork is in collections across the globe and he is represented by multiple galleries across the United States. He continues to travel to fascinating and often remote locations to immerse himself in the wonders of nature, and human-centered design, and upon his return, combines his observations of natural order and disorder, with the science, mathematics and engineering to create the art he loves in the studio. 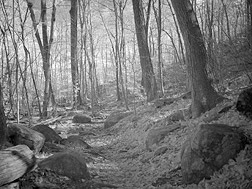